The President went on to say that the re-structuring of tourist destination will include revamping and relocation of buildings and local residences that are deemed not in accordance with Ulos Village, a traditional village.

To that end, the Government will prepare a master plan in a bid to lure investment to the area, one of which for the development of Situngkir white sand beach, he added 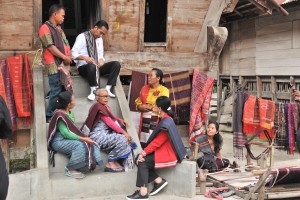 President Jokowi had a dialogue with residents during a visit to the village of Ulos, in Kampung Ulos Hutaraja, Lumban Village, Suhi Toruan, Pangururan District, Samosir Regency, Tuesday (30/7). (Photo by: Jay/PR)

Earlier, the President stated that there are 28 tourist destinations in the area around Lake Toba which will be divided into four clusters which represent history, culture, water recreation, and nature.

For the record, Lake Toba is included in the Government’s top priority in a world-class National Tourism Strategic Area (KSPN) known as “the New Bali” (DNA/JAY/ES)