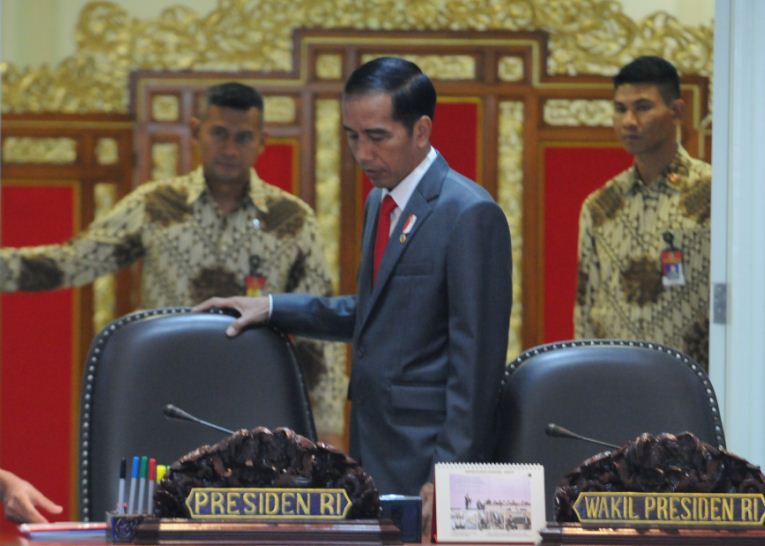 President Jokowi is ready to preside over a limited cabinet meeting at the Presidential Office, Jakarta, Wednesday (29/3). (Photo by: Jay/Public Relations Division)

President Joko Jokowi Widodo said poverty rate in the villages is still at 13.96 percent, almost double than that in the cities at 7.7 percent.

Therefore, the Government will continue increasing allocation of Village Funds to bring benefits for people in the villages, especially in the effort to reduce poverty there, President Jokowi said.

Regarding the channeling of the Funds, President Jokowi said that based on the Governments report, in the 2016 State Budget there were still four regencies/cities whose Village Funds could not be disbursed from the State Treasury General Account to the Regional Treasury General Account due to the late disbursement process at the Regency/City government level. In addition, there were also 241 villages that have not received Village Funds due to various factors.

I want that this problem be addressed immediately. And this year, we have to ensure that all villages can receive the Village Funds, the President said.

President Jokowi went on to say that the use of the Village Funds must also be allocated to boost economy as well as to tackle poverty and reduce gap in the villages.

The Governments data shows that 29% of the Village Funds has allocated to improve infrastructures that support economy in the villages such as village roads, bridges, village traditional markets, clean water facilities, wells, embankments, and irrigation channels.

For the next stage, however, President Jokowi hopes that a bigger portion of the Funds can be used to develop economic potentials in the villages, especially for agricultural and fishery industries, as well as for the development of MSMEs (micro, small, and medium enterprises) in the villages.

In the development of economic potentials in the villages, the approaches cannot be done partially; rather, it has to be integrated from the upstream sector to the downstream sector, the President concluded.