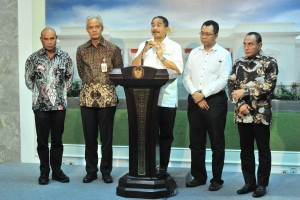 The President has ordered to complete construction all facilities and infrastructure in those four destinations by 2020. In other words, the 3A aspect must become priority, namely attraction which must be developed based on world standard, accessibility, and amenity, said Minister of Arief Yahya after attending a limited meeting on the Development of Priority Tourist Destinations, at the Presidential Office, Jakarta, Monday (15/7).

Arief expressed hoped that Lake Toba, North Sumatra can also be recognized as UNESCO Global Geopark (UGG). Regarding accessibility, he said that the Silangit airport  as the main gateway to the lake  has been transformed into an international airport but construction of a toll road connecting Kualanamu and Tebing Tinggi must still be completed.

According to him, the Government has received an investment worth Rp6 trillion to develop Lake Toba and its attractions, to improve its accessibility, and to provide amenities for tourists such as hotels.

In the meantime, Governor of North Sumatra Edy Rahmayadi acknowledged that there are several issues in developing Lake Toba, including infrastructure such as roads that need to be developed to connect seven regencies surrounding the lake. Quality of human resources in the tourism sector to provide excellent service to tourists must also be improved, he said.

We will improve quality of human resources through trainings at vocational schools, he said.

Governor of West Nusa Tenggara Zulkifliemansyah said that infrastructure to support the hosting of MotoGP 2021 in Mandalika, Lombok are expected to be completed on schedule.

Maybe some of you have been questioning whether construction of the circuit can be finished fast. In fact, we did not design a circuit particularly for motorsport race, but a street circuit like those in Singapore and Monaco. Thus, we can use a public road as a circuit. We just have to temporary install stages and other facilities (during the race), he said, adding that the development will begin in October this year and is planned to be finished next year.

Zulkifliemansyah added that President Jokowi has instructed President Director of Indonesia Tourism Development Corporation (ITDC) to design the circuit to prepare for the possibility of using the circuit not only to host MotoGP race but also Formula 1 race. I suppose we have to prepare for the arrival of domestic and international tourists if MotoGP and Formula One races can be held in Mandalika, he said.