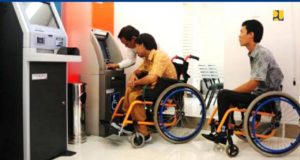 (Photo by: Documentation of Ministry of Public Works and Public Housing)

In a bid to ensure accessibility for all city residents, especially persons with disabilities, President Joko “Jokowi” Widodo has enacted Government Regulation Number 42 of 2020 on Accessibility to Settlements, Public Services, and Protection from Disasters for Persons with Disabilities.

Ministry of Public Works and Public Housing as a construction service supervisor announced that it will continue to encourage developers and housing finance institutions to pay attention to the rights of persons with disabilities as mandated by the Government Regulation.

“Both developers and housing finance institutions, in providing their services, must pay attention to the principle of inclusiveness by considering accessibility in planning,” said the Acting Secretary General of the Ministry Anita Firmanti at a webinar in commemoration of the 2020 World Habitat Day, Tuesday (29/9).

According to Anita, fulfilling accessibility for the public includes easy access to buildings, provision of information aids in the form of audio, visual, and tactile as well as providing assisting officers in public service places to guarantee equal rights and facilities for persons with disabilities in obtaining public services,” Anita stated.

Anita also stated that in the efforts to achieve urban equality and independence, all parties must strive to eliminate discrimination against vulnerable groups and persons with disabilities during their activities in cities or residential areas.

“In the future, the Government and the public must work together to achieve independence through the fulfillment of facilities and infrastructure in urban settlements that are feasible and accessible to all groups, especially persons with disabilities,” Anita added.

On the occasion, Director of Settlement Area Development (PKP) of the Directorate General of Human Settlements to the Ministry Didiet Arief Akhdiat stated that public service providers must adjust service standards and provide information as well as human resources that meet the provisions on the proportion of access and services for persons with disabilities. (Public Communication Bureau of Ministry of Public Works and Public Housing/UN)