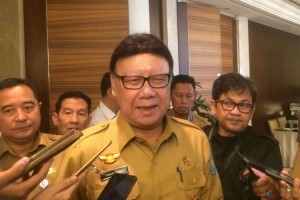 Minister of Home Affairs Tjahjo Kumolo strongly condemned the spreading of false news and hoaxes that could affect public trust in election organizers, the Government, the election participants and other related parties who have been maintaining their professionalism and integrity ahead of the 2019 Simultaneous Elections.

One of the recent hoaxes was the findings of 7 containers from China containing voted ballots. In addition to that, there was also a false news claiming that there is an additional of 31 million voters to the 2019 election voters list.

These are obviously false news that may spur anxiety among public, Kumolo said in Jakarta on Thursday (3/1).

He considered that the hoaxes, slanders and spread of hatred have gone too far and have seriously damaged the countrys process of democracy, particularly ahead of the national election which will be held on 17 April 2019.

Therefore, the Minister invited all parties to fight against hoaxes. Lets fight and report any alleged hoaxes or slanders to the Police, Kumolo said.

For the record, the General Election Commission (KPU) has confirmed that the news regarding the findings of 7 containers from China containing 10 million voted ballots for 2019 Presidential and Vice Presidential elections is hoax.

It is false news, Chairman of the KPU Arief Budiman stated. (Information Center of Ministry of Home Affairs / ES)