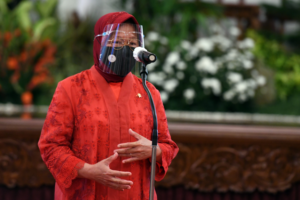 The Government has announced that it will continue to maintain the speed of data updating for social assistance which performed every month. Therefore, the regional governments must go hand in hand and synergize with Ministry of Social Affairs.

“Ministry of Social Affairs always updates the data. Every month, I issue a decree [Decree on Poverty Data Verification]. If the regional governments can go hand in hand with us, it will be very helpful for the recipients,” Minister of Social Affairs Tri Rismaharini said on Wednesday (08/09/2021).

According to Risma, poverty data updating, verification, and validation are regional governments’ duty and authority as stated in Law Number 13 of 2011 on the Handling of the Poor and Needy, Articles 8, 9, and 10.

“So, Ministry of Social Affairs does not collect the data directly on the ground. The Ministry’s task is to approve the data updated by the regional governments. The problem is there are governments at regency/city levels that do not actively update the data,” she added.

The Minister further explained that the poverty data is dynamic. Some people have moved or died or some of them have improved their economy so they are no longer eligible to receive social assistance. Thus, all ranks of the regional governments are urged to be active and closely monitor the data collection in order to present the accurate one and avoid mistargeting of social assistance distribution.

Risma has received some reports about mistargeting of social assistance distribution, for example in Bolaang Mongondow regency, North Sulawesi province, there was a Village Head who registered his/her name as a recipient. In addition, she has also received a report about a recipient of social assistance whose house is bigger than her official house.

These problems require more attention from the local governments. Therefore, she expressed hope that the verification processes from the lowest-levels including villages/sub-districts to the higher-levels including regencies/cities must be carried out effectively. (PR of Ministry of Social Affairs/UN) (AP/MMB)