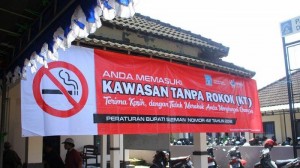 The Central Government has urged regional governments to establish and speed up the issuance of smoke-free zone bylaw and its implementation in schools.

The obligation of regional governments to implement smoke-free zones is regulated in Law Number 36 of 2009 on Health, Article 115 paragraph (2), Government Regulation Number 109 of 2012 on the Safety of Materials that Contain Addictive Substances in the Form of Tobacco for Health and Joint Regulation between Minister of Health and Minister Home Affairs Number 188/Menkes/Pb/ I2011 Number 7 of 2011 on Guidelines for the Implementation of Smoke-Free Zones, said Director General of Regional Development of Ministry of Home Affairs Muhammad Hudori in a dialog to commemorate World No Tobacco Day at Ministry of Health, Jakarta, Thursday (11/7).

Cigarette consumption cannot be separated from smoking behavior, which is closely related to poverty. This is because, buying cigarettes means an individual and family must reduce the use of limited resources for other more important needs such as education, quality food, and health services, Hudori said.

Costs associated with smoking-related diseases, Hudori added, will be more expensive than those already spent on cigarettes and they do not only involve medical expenses but also the costs from losing productive time.

Regarding the implementation of the smoke-free zones, Hudori reminded regional governments to formulate and speed up the issuance of smoke-free zone bylaw and Regulation of Regional Head as well as its implementation in schools and to promote preventive efforts through continuing education for minors and school-age children regarding adverse impacts of smoking.

He also reminded regional governments to increase the roles of community leaders, religious leaders, and local traditional leaders in campaigning for policies on smoke-free zones and to provide designated places for smoking in the form of open space. (Ministry of Home Affairs PR/ES)