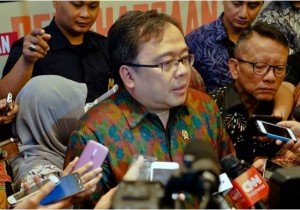 The Government will use the list of thousands of names or corporations owned by Indonesian citizens in Panama Papers scandal as an additional reference to increase tax income through tax amnesty.

Minister of Finance Bambang Brodjonegoro admitted that there are a lot of people and companies keeping their money in fictious companies in Panama but investing in Indonesia.

The Government will use the results of the joint investigation of journalists from various countries and compare it with the data from tax authorities of developed countries which are the members of the G-20, Bambang said in a talkshow Sudut Istana (the corner of the palace) aired on TVRI, Jakarta, on Wednesday (6/4) evening.

Bambang promised to announce immediately the result of the study of the document that created global uproar.

Cabinet Secretary Pramono Anung on previous occasion has said that the most important thing is to validate the names of Indonesian citizens which were mentioned in Panama Papers, and to validate whether there is global political motives behind it or not.  It is because there is a prime minister who steppped down from the position, and also elites of certain countries who became furious due to this issue, Pramono added.

Pramono explained that Indonesian Government saw it in a positive perspective and will validate the data in Panama Papers. Moreover, the Government will announce tax amnesty and hopefully it will be implemented well and in line with the data mentioned in Panama Papers.

Meanwhile, relating tax amnesty, Minister Bambang explained that the Government is still communicating with the House of Representatives (DPR) to finish the discussion of draft of the Law on Tax Amnesty immediately, so it can be included in Revised State Budget.

If the discussion can not be finished until the draft of the Revised State Budget (RAPBN-P) is submitted, Bambang said that the Government will take other measures for taxpayers who still keep their money abroad.

We have prepared other alternatives similar to the tax amnesty, but the revenues will be lower, Bambang said.

Bambang predicted the amount of money belongs to Indonesian citizens kept in other countries is quite large, or at least Rp 11,000 trillion. Hopefully, the money can be withdrawn if there is Law on Tax Amnesty. (ANT/ES) (RAS/MMD/YM/Naster)