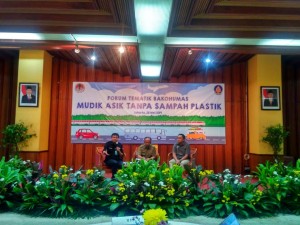 The volume of plastic waste has significantly increased from 11% in 2005 to 15% in 2015, according to Director General of Waste, Toxic, and Hazardous Waste Management from Ministry of the Environment and Forestry Rosa Vivien Ratnawati.

“From the total volume of plastic waste, 15% are recycled, while 60-70% are dumped and the other 15-30% have not been managed and flow to rivers, lakes and ocean,” Rosa said during Public Relations Coordinating Board (Bakohumas) Thematic Forum at Manggala Wanabakti Building, Central Jakarta, Tuesday (28/5).

According to her, waste that are disposed on the ground will contaminate the soil and will be even more dangerous if it contains toxic heavy metal compounds that can trigger cancer to humans, such as mercury, lead and cadmium.

In the meantime, waste disposed into waters, she added, may disrupt the ecological balance which can cause the death of aquatic species. In addition, clogged drains due to plastic waste are also blamed as the cause of flooding.

Rosa went on saying that the main message of Law Number 18 of 2008 on Waste Management is to shift paradigm of waste management from collecting waste to reducing at source and resources recycle.

“The Government has implemented the concept of ‘3R’ (reuse, reduce and recycle), the extended producer responsibility (EPR) concept, processing and utilization of waste into resources including as raw materials and renewable energy sources, as well as the final processing of waste that is environmentally friendly,” Rosa said.

In the meantime, regarding the theme of the event Mudik Asik Tanpa Sampah Plastik (Mudik Without Plastic Waste), Director of Waste Management Novrizal suggested that there should be monitoring in the rest areas during the mudik (Eid exodus) period.

Meanwhile, Syaiful, Editor in Chief of www.greeners.co as well as PIC for Less Waste Event Program, urged the public to put the garbage in the trash bins based on the type of trash. (AIT/HEN/ES)