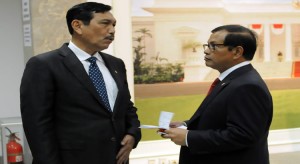 President Joko Widodo will preside over a marathon meeting for three consecutive days starting on Thursday (3/9) tomorrow, at the Presidential Palace in Bogor, West Java. The meeting aims to discuss several issues including the findings of 154 laws and regulations deemed to be a barrier in boosting the national economy, as well as the issue of low budget absorption in the region.

Cabinet Secretary Pramono Anung said that President Joko Widodo has asked Minister of Home Affairs to carry out the reward-and-punishment system to the region whose budget absorption is still very low.

“The punishment may be in the form of not providing the Special Allocation Fund (DAK), cutting incentives or, if necessary not transferring money with cash but in debt securities,” Pramono told reporters after attending the plenary Cabinet meeting, at the Presidential Office, Jakarta, on Wednesday (2/9) afternoon.

Cabinet Secretary went on to say that the point of the marathon meeting in Bogor is to follow up the findings reported by the Coordinating Minister for the Economy Darmin Nasution regarding the 154 laws and regulations that need improving.

“Hopefully, the 154 regulations deemed to be a barrier can be identified,” Pramono said.

Measures have been taken

Meanwhile, Coordinating Minister for Political, Legal, and Security Affairs Luhut Binsar Pandjaitan accompanying Cabinet Secretary Pramono Agung added that all measures to deal with economic problems have been taken, and are consistent with the current development.

“That was also said by the Director of the International Monetary Fund (IMF) Christine Lagarde. So, I think there is no such thing as special anymore,” Luhut said.

When it comes to legal issues, according to Luhut, in the future, his office will conduct a road show to explain the prevention issues which will later be disseminated by the Attorney General, the National Police Chief, and himself to the executing elements in all regencies, provinces so there is no reason anymore that budget absorption becomes a barrier, as there is fear of legal actions in the future.

“It is our hope that we can disperse the Rp 273 trillion and it can be realized in the third quarter, we will be able to try on the 60% absorption of capital expenditure. Thus, we can see the liquidity in the market be better,” Luhut said.

According to Luhut, the compactness issue has been reported to the President that all elements in the cabinet will build a better compactness.

“Apart from that, the loyalty issue is perpendicular to the institution and we will act decisively to people or the element until the ministerial level should any party not abide by the decisions or orders stipulated in the cabinet meeting,” Luhut said while adding that there is an emphasis from the President that all Ministers should implement the decisions that have been agreed upon.

“It has become a useful tool to remove doubts over the existing budget absorption,” Luhut affirmed.

Luhut asked all parties to avoid any thoughts of the government is not careful, not aware. “We are very careful, very aware, not over confidence but we are confidence as we look at the numbers, the data that we are indeed heading to a better circumstance,” Luhut said.

He also asked all parties to avoid any thoughts of the government does not understand the economic problems that Indonesia is currently facing. “We are very aware, as the Coordinating Minister for Political, Legal, and Security Affairs, I have to be aware of how the economic problems that I mentioned earlier or will be explained by the Coordinating Minister for the Economy,” Luhut said. (M/YM-Naster)