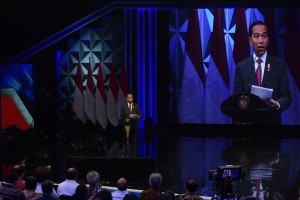 In last four years, the Indonesian Government has made every effort to recover the countrys economic condition and had worked hard to build new economic foundations, President Joko Jokowi Widodo has said.

The minerals and coal boom period is over. There is no other option left, but to make changes. Therefore, we must improve our economic foundations, President Jokowi said in his remarks at the 18th Anniversary of MetroTV on Monday (26/11),

The President also expressed hopes that the Indonesian people can shift their habits from being consumptive to being productive, efficient and competitive and without the changes; it would be very difficult for the country to compete with other countries. Sometimes what we do doesnt immediately pay off. Nothing is instantaneous. We have to struggle first to become a productive and competitive healthy nation, President Jokowi said.

The President added that the Government has also improved the fiscal structure from consumptive to productive, citing the example of subsidized fuel in which 82 percent of it is enjoyed by the upper classes; thus in 2014, the subsidized fuel funds allocation was cut and redirected for productive programs to build infrastructure.

Decentralization was also carried out by the Government in constructing electric power plants, in order to bring up new economic centers outside Java Island, he added.

President Jokowi added that the Government has also cut down on some complicated regulations. He cited an example of 258 permits steps on power plants that were cut down to 58 steps; yet, he still finds 58 steps too much.

On the occasion, President Jokowi said that Indonesias rank in ease of doing business in the last four years has improved rise to 72nd from previously in 120th.

In terms of reducing inequality and poverty, the Government, he added, in the last four years managed to reduce the Gini ratio to 0.38 from 0.41. Reducing Gini ratio also takes process and time, the President said, adding that poverty dropped from 11.2 percent to 9.8 percent in four years.

Meanwhile, to promote the development of micro, small and medium enterprises, the Government has subsidized the interest of Smallholder Business Credit (KUR) to 7 percent. In addition, 30 micro waqf bank was also established by the Government in Islamic boarding schools to provide economic benefits to the residents near the school.

The second major stage that will be started in 2019, the President added, is the development of human capital; thus, he said that T the Government must guarantee the growth and development of children since in the womb, adding that stunting case decreased from 37 percent to 30 percent.

Other than that, the Smart Indonesia Card has also been distributed to approximately 19 million students from underprivileged families.

In the future, the President continued, revitalization of vocational education and training will be strengthened and multiplied so that the human capital development can really materialize just like infrastructure development that has been done. (DNS/OJI/ES)