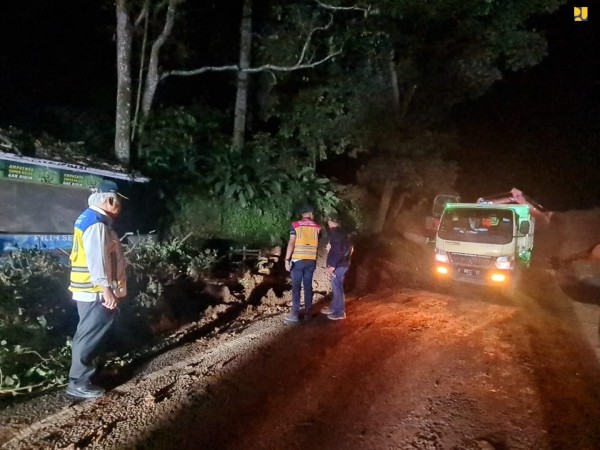 Basuki said that the focus was to clean the Cipanas – Cianjur road blocked by fallen trees and landslide with excavators and dump trucks that have been set at the location.

“Until 01.45 Western Indonesia Time, Tuesday (11/22), totally 6 excavators and 6 dump trucks have been utilized on the two opposite sides (the southern side of Cianjur and the northern side of Cipanas district),” he said.

The PUPR Minister estimated that the cleaning work can be completed on Tuesday (11/22) afternoon, so the Cianjur – Cipanas road can be accessible again.

The Spokeperson of PUPR Ministry Endra S. Atmawidjaja in the release published by PUPR Ministry, Tuesday (11/22), mentioned that the road blocked by the landslide has been cleared up.

“The road blocked by the 140 m-slope at the two locations have been cleared up this morning at 08.00 Western Indonesia Time. Now, we focus on cleaning the road, so it can be accessible from two directions, and on evacuating the bodies found under the slopes,” Endra explained.

Endra hoped that making the road accessible will ease logistics mobility to the affected area.

“We hope that the mobility of medical aids, medical personnel, food supplies and clothes will be easier,” Endra expressed.

As an emergency response after the earthquake happened in Cianjur, PUPR Ministry has utilized 6 hydrants, 4 vehicles with water treatment, and 6 portable toilets set near emergency tents, especially around the Regent’s pavillion and Cianjur Hospital.

Minister of Social Affairs Tri Rismaharini also made a direct inspection to ensure the logistics distribution for the earthquake victims. Minister Risma arrived at Cianjur on Tuesday (11/22) early morning and joined the advance team.

Tents and toiletries are loaded up at the elementary school building of SDN 2 Sukamaju, Munjul kampong, Gasol village, Cugenang district. At the location, Risma gave direction to the Ministry personnel to distribute tents and blankets to the people.

“We must anticipate if there will be another following earthquake. Therefore, we prepare temporary places to stay for the people whose houses collapsed for the people’s safety. We prepare the tents,” Risma said.

Meanwhile, ready-to-eat food prepared through a public kitchen will be distributed in the morning, and also portable toilets, and clean water. According to Risma, clean water is one of the essential needs which should be provided.

“Some people are having difficulties in finding clean water and toilets. The aid is on the way, we try to provide water tanks,” Risma mentioned.

The Social Affairs Ministry has deployed their teams at seven impacted subdistricts. Each post will be equipped with supplies of tents, toiletries, food for children, ready-to-eat food, and others. The aid has been distributed since Monday (11/21) evening.

Previously, the National Disaster Management Agency (BNPB) have also deployed quick response teams and have distributed supplies to the affected area to handle the emergency situation after the 5.6 magnitude earthquake happened. The BNPB has sent 47 tents and provided supplies such as food materials and other main stuffs valued at Rp500 million.

Head of BNPB Suharyanto said that the Government has also provided aid to restore the people’s houses which are impacted.

“Damaged houses will be built again by the Government,” Suharyanto said in his press statement in jakarta, on Monday (11/21).

Suharyanto also emphasized the importance of synergy between the stake holders to make the disaster handling in Cianjur works smoothly.

“Surely, after the disaster happened, we need to make maximum efforts in good synergy and solidity, so we can do the disaster handling at our best,” Suharyanto remarked. (PR Offices of PUPR Ministry, BNPB Agengy, and Social Affairs Ministry / UN)(AW/LW)