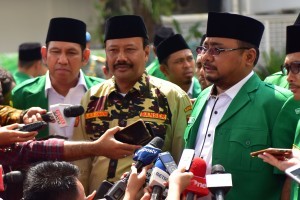 There are many groups of caliphate in ministries, state agencies and state-owned companies (BUMN), among civil servants and high-rank officials. We have conveyed the information to the President and asked him to immediately take serious action against them, Yaqut told reporters after meeting President Joko Jokowi Widodo at the Merdeka Palace, Jakarta, Friday (11/1).

Yaqut also emphasized that GP Ansor is always willing to work together with the Government to fight against radicalism spread by those groups. However, he said he is also aware that the Government must respect and follow the law to punish the suspected civil servants.

Therefore, Yaqut continued, GP Ansor has urged the Government to amend Law on Civil Servant once the political contestation is over so that the Government can take more strict actions against those involved in radical movement within government institutions. (DID / RAH / ES)