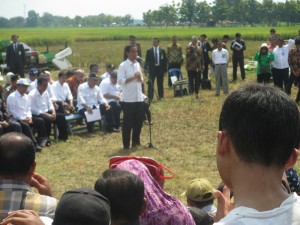 President Jokowi dialogue with farmers during the main harvest in Indramayu, West Java, on Wednesday (18/3) afternoon

President Joko Widodo (Jokowi) reiterated the government’s commitment that no longer imports the rice, although there was shortage of supply. Therefore, the President asked the farmers to increase national rice production.

“I am very happy. Because, the direct harvest we were so optimistic. Sure, increased of rice production, “said President Jokowi, in a speech at Grand Harvest and Delivery of Agricultural Machinery by the President in Kedokan Gabus Village, Gabus Wetan District, Indramayu Regency, West Java, on Wednesday (18/3).

On that occasion, President Jokowi asked the farmers to be able to raise rice production, from the original of 5 tons per hectare of rice fields, to 7-8 tons, in line with the assistance tractors, irrigation, and fertilizer from the government.

“The farmers should not depend on the price of the rice, but it depends on rice production,” the President’s message as he mentions, 52 percent of the national irrigation that damaged, has been repaired now as much as 30 percent.

On that occasion, President Jokowi announced, the price of government procurement (HPP) of Rp 3,700 per kg which is the price of dry grain harvest. “Purchases by Bulog Rp 3,300 now. This means rose 10.4 percent. “He explained.

According to the President, if the HPP dry grain is high rise, hence the price of the rice will be high, and the people which consume the rice would blamed him.

On the same occasion, the Minister of Agriculture Amran Sulaiman report, his side will distribute 5,132 units of agricultural machinery for the entire West Java. Total tractor that has been distributed nationally as much as 30 thousand units from the target of 60 thousand units of the original plan. “This is the biggest assistance throughout history,” he added.