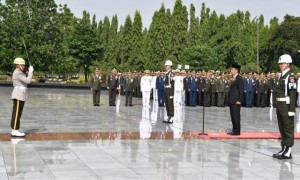 President Joko Jokowi Widodo asserted that a great nation is a nation that appreciates and respects its heroes. Therefore, according to the President, as an appreciation to the services of the heroes, Indonesians must give substance to the independence.

However, the President admitted that it will not be easy to face challenges as well as obstacles in realizing the dreams of the heroes. Therefore, we ask for blessing and support from the families of Indonesian heroes so that the people will be able to improve the nation, President Jokowi said during a gathering event with widows/families of the heroes, and independence pioneers as well as pioneers widows at the Kalibata Convention Building, Kalibata Heroes Cemetery, Jakarta, on National Heroes Day on Thursday (10/11).

Previously, in a Ceremony commemorating the 2016 National Heroes Day,  President Jokowi acted as the Leader of Ceremony in the event held at Kalibata Heroes Cemetery, South Jakarta. At 08.15 a.m. Western Indonesian Time, the President led the ceremony and instructed the participants to observe moment of silence for a minute. To recall the services of all heroes, let us observe a moment of silence, President Jokowi said.

Before concluding the ceremony, Minister of Religious Affairs Lukman Hakim Saifuddin prayed for the spirit of the heroes.

The President, Vice President, and Minister of Social Affairs then headed to the Kalibata Convention Building to hold a gathering event with widows/families of the heroes as well as independence pioneers and pioneers widows . President Jokowi, at around 09.00 a.m., left the location. (BPMI/ES)(RAS/MMB/YM/Naster)