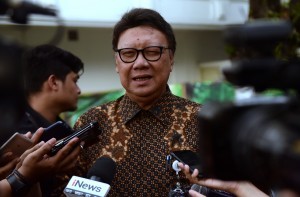 He then appointed Vice President Jusuf Kalla to coordinate with related stakeholders regarding this issue.

Minister of Home Affairs Tjahjo Kumolo cited the related stakeholders to handle the issue, such as Ministry of Public Works and Public Housing, Ministry of Transportation and Ministry of State-Owned Enterprises representing central government; and Jakarta, West Java as well as Banten regional governments.

He said that his Ministry together with those stakeholders will immediately discuss and propose an institution to take charge of transportation management and integration as ordered by President Jokowi.

All stakeholders must have an agreement and give their authority in each area. Afterwards, the President and Vice President will decide the institution to take charge of this issue, Kumolo said, adding that transportation management is an urgent matter aims to reduce traffic congestion in Greater Jakarta as it has caused Rp 100 trillion loss to the country per year.