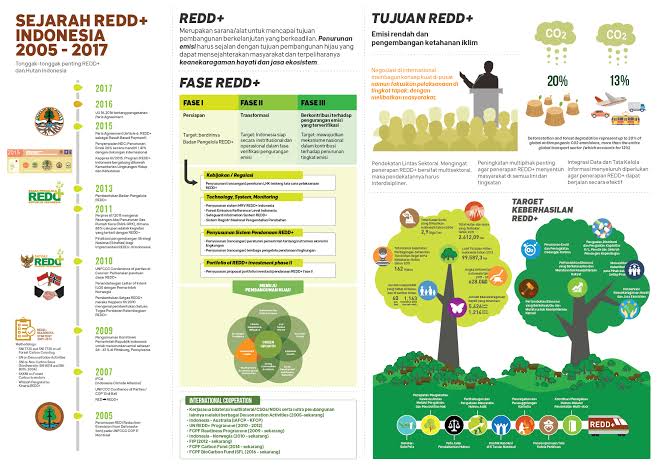 The 2005-2017 development of REDD+ (Source: Ministry of Environment and Forestry data).

Indonesia recorded a funding approval of USD103.8 million from the Green Climate Fund (GCF) for the proposal of REDD+ (Reducing Emissions from Deforestation and Forest Degradation) Results-Based Payment (RBP).

This achievement demonstrates Indonesia’s impressive response to the threat of climate change, as well as a sign of increasing trust in the country and the international community. This momentum can also be a good start for the future Indonesia-GCF relationship.

Minister of Environment and Forestry (LHK) Siti Nurbaya stated that a decade of hard work in conserving forests and avoiding deforestation had paid off through performance-based payments from Norway and the GCF.

“However, our efforts cannot stop here. This achievement will contribute to low emission development efforts, and as mandated by the President, also to community-based environmental restoration,” the Minister said.

Meanwhile, Minister of Finance Sri Mulyani Indrawati elated that Ministry of Environment and Forestry managed to secure USD103.8 million, even greater than Brazil’s proposal with its Amazon (USD96.5 million).

“I thank the Ministry for showing the world that Indonesia is committed to climate change as shown by this concrete achievement. Hopefully, this will become a momentum so that it will continue to be utilized to increase the involvement and support of all parties related to proposals from Indonesia submitted to the GCF,” the Minister said.

Furthermore, the Minister revealed that the funding received by Indonesia can aid the State Budget to meet the funding needs of climate change.

“The results of the Climate Budget Tagging (CBT) show that there is still a gap between the need for national climate change funding and the climate change budget that has been allocated from the State Budget,” she added.

For the record, the Directorate General of Climate Change Control (Ditjen PPI) of Ministry of Environment and Forestry has led the preparation of the REDD+ RBP proposal to the GCF through the cooperation of various parties including international organizations.

Meanwhile, Ministry of Finance’s Fiscal Policy Agency as the National Designated Authority (NDA) of the GCF conducted a review and provided a No Objection Letter (NOL) and submitted a proposal to the GCF, which was compiled by the United Nations Development Program (UNDP) as an Accredited Entity (AE) together with other partners, the Global Green Growth Institute (GGGI), who compiled the initial Concept Note.

However, Indonesia still needs more climate change funding to reach its NDC target. The commitment of developed countries to finance climate change of USD100 billion per year until 2020 to support developing countries needs to be realized immediately. (PR of Ministry of Environment and Forestry /Ministry of Finance/EN)