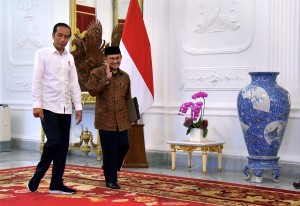 President Jokowi welcomes the 3rd President of the Republic of Indonesia Baharuddin Jusuf Habibie at the Merdeka Palace, Jakarta, Friday (25/5). Photo by: Agung/PR.

The 3rd President of the Republic of Indonesia Baharuddin Jusuf Habibie has congratulated President Joko Jokowi Widodo on his victory in the last Presidential Election.

“I want to congratulate the President for obtaining mandate from the people to continue his works for the sake of our future generations,” Habibie said during a press conference after his meeting with President Jokowi at the Merdeka Palace, Jakarta, Friday (25/5).

Habibie added that he and President Jokowi have agreed that maintaining unity, security and equality is very pivotal for the people of Indonesia in the future.

“A President is a leader, not only for those who vote for him, but also for all Indonesian people,” Habibie said.

He went on to say that the current situation in Indonesia is different from the situation in 1998 and that all parties have obligation to prevent national disintegration.

In the meantime, President Jokowi has expressed his hope to meet with the Presidential Candidate Prabowo Subianto.

Since after the voting day I have conveyed that I want to meet (with Prabowo Subianto), but there has been no opportunity to meet until today, President Jokowi told reporters after the meeting with Habibie.

The President said that a meeting between him and Prabowo would be seen positively by the people and could send signals that there was no problem among the political elites.

The President went on to say that he his previous meetings with Agus Yudhoyono from Demokrat Party and Zulkifli Hasan from PAN Party are part of political process to lower the tension after the election process.

President Jokowi further said that his door is always open for everyone who wants to work together to build the nation.