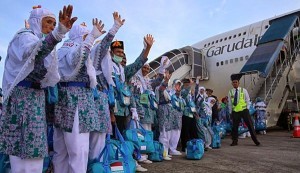 Minister of Religious Affairs Lukman Hakim Saifuddin stated that the additional hajj quota for Indonesia this year which is 52,200 quota will be prioritized for prospective pilgrims who have never performed hajj. Therefore the Minister hopes pilgrims who have been on hajj to give the opportunity to those have not been on hajj. “The priority is really aimed at those who have never been on hajj at all,” the Minister said after delivering a speech at the Halaqah Ulama (Muslim Scholars Gathering) under the theme ‘Reflections on the 33rd Nahdlatul Ulama  Khittah’ held at the Salafiyah Syafiiyah Islamic Boarding School, Situbondo, Thursday (12/1).

As reported earlier, President Joko Jokowi Widodo, at the State Palace, Jakarta, Wednesday (11/1) afternoon, suddenly held a press conference related to the decision of the Government of the Kingdom of Saudi Arabia, which returns the hajj quota for Indonesia to normal numbers, that is, 211,000. The Saudi Arabian Government, which in this case Minister of Hajj and Umrah of the Kingdom of Saudi Arabia, has decided to return Hajj quota for Indonesia from 168,800 into 211,000 for 2017, the President said.

Minister of Religious Affairs Lukman Hakim Saifuddin expressed his gratitude to the increase. He considered that such increase is very significant because it has been four years Indonesia hajj quota was cut by 20 percent into 168,800.

According to the Minister, queues of Indonesian hajj pilgrims so far are quite long, although various among provinces. When asked about the use of quota, the Minister said that additional hajj quota will be prioritized to those have never been on hajj.

The Minister also said that hajj is only obliged once, hence those having been on hajj are not obliged to go on hajj anymore. “The duty has been done then we give the opportunity to those who have never been on at all,” the Minister explained.

Separately, Director General of Hajj and Umrah Management (PHU) Abdul Djamil asserted that after the quota was announced, then his office has now carried out preparation for the 2017 hajj implementation, which has been prepared since the end of 2016.

According to Djamil, there are three focuses to be conducted in the future. Firstly, discussion on Hajj Implementation Cost (BPIH) with Comission VIII of the House of Representatives (DPR). The discussion result will be taken to the President to be issued as Presidential Decree on BPIH.

The second focus is domestic preparations consisting of acquittance, consolidation with related parties, embarkation preparations, hajj ritual practices and so on, he said.

Apart from domestic preparation, Abdul further continued, his office will also focus on preparations of hajj services in Saudi Arabia. Third focus is to coordinate with institutions in Saudi Arabia regarding accommodation, transportation, services in Armina (Arafah, Muzdalifah, and Mina) and other services,” he said. (PR of Ministry of Religious Affairs/ ES) (MUR/YM/Naster).