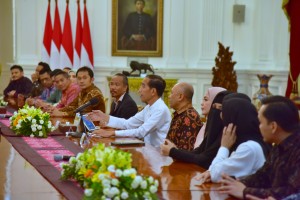 “We need a big event to show the world (our potential),” President of Indonesia Fashion Chamber Ali Charisma said after a meeting between President Joko Jokowi Widodo and halal life style entrepreneurs at the Merdeka Palace, Jakarta, Thursday (31/1).

He went on to say that the entrepreneurs asked for President Jokowi’s concrete support in strengthening upstream and downstream business and in providing regulations to stimulate the development of micro, small and medium enterprises (UMKM) of Muslim fashions in Indonesia.

In the meantime, in the upstream business, he said, the important thing is to create new products from local contents available in Indonesia, while in the downstream business, a strategic marketing strategy is needed.

“Maybe we can look at some fashion districts in other countries, including Duomo in Italy, Harajuku in Japan, and Taqsim and Al-Fatih in Turkey. Indonesia, with the largest Muslim population in the world, should also have several Muslim fashion districts,” Ali said, adding that the entrepreneurs will hold another meeting with President Jokowi next month to discuss other matters in more details. (DNS/OJI/ES)