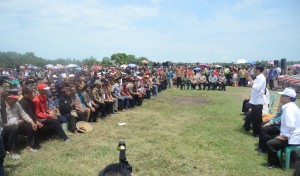 In this place, President Jokowi handed over 1,099 units of tractors to all farmers in West Java Province. However, the President also requested that West Java is able to increase the production by 2 million tons per year to support national food self-sufficiency program.

President Jokowi wants West Java has the ability to add as many as 2jt tons the rice production, and the farmers were present at the event was simultaneously declared “capable”.

The Government contributed as much as 1,099 units of tractors, and next year will probably increase again, as much as 2 to 3 times the tractor. The government will also improve irrigation that has been 15 years this was never repaired; build more reservoirs to support the food self-sufficiency program.

According to Jokowi, West Java does have the most substantial task of having to add up to 2jt tons of food production. He said, because the West Java is the food barns.

“So I hope that this is really be used in order to increase production, because we do not want any more of our country, Indonesia, import more rice from the outside. I was embarrassed when he meets President of Vietnam a month ago, who asked when President Jokowi buy more rice from Vietnam? Jokowi said.

Attending on the handover of tractors among others, the Minister of Agriculture Amran Sulaiman, Minister of State Secretary Pratikno, Ministry of Public Works and Public Housing Hadimuljono Basuki, and Governor of West Java Ahmad Heryawan.  (Humas Setkab/ES