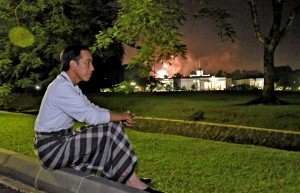 After watching a movie Cek Toko Sebelah (Check the Next Store) at Botani Square, Bogor, on Saturday afternoon, President Joko Jokowi Widodo did not have a special activity to welcome the New Year. The President celebrated it at Bogor Presidential Palace, by enjoying the ambience around the Palace.

On his tweet, the President included his photo wearing plaid motive sarong, white long shirt, and black sandals. He sat down on the grass of the Palaces garden. His eyes focused to the front, while behind the Palace fireworks soaring in the air.

The Head of Press, Media, and Information Bureau of Secretariat of the President Bey Machmudin, in his press release, on Sunday (1/1) dawn, said that since morning until midnight at the last day of 2016, on Saturday (31/12), President Joko Widodo spent his time with his family.