Having No Economic Trouble, Rupiah Estimated Remain Stable Until End of Year 2014 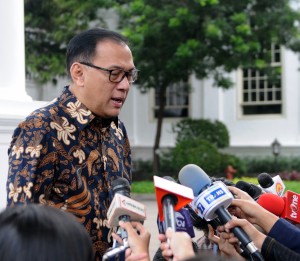 Having No Economic Trouble, Rupiah Estimated Remain Stable Until End of Year 2014

Coordinating Minister Of Economy Sofyan Jalil says, nationally there are no economic trouble until these days. Instead of domestic causes, he assesses that the weakening of rupiah which reachs to Rp.12.900 per US dollar was caused by what happened in United States.

As I have explained few weeks earlier, Vice President also has explained, that the cause are not domestic, but from United States of America. Due to speculations that the US government, The FED, would increase the interest, which actually would not. After that, rupiah is back to its fundamental rate, says Sofyan to the press after attending closed meeting regarding the fluctuation of rupiah. The meeting led by President Joko Jokowi Widodo, at his office, Jakarta, on Monday (22/12).

Governor of Bank of Indonesia (BI) Agus Martowardojo also says that the current fluctuation is at Rp.12.500, although a day before there was a sharp increase. In addition, he says But that was mainly not because domestic factors, especially when there was something happened in Rusia which brings pressure that causes masive capital out flow in Rusia. There was also speculations related to a meeting at the Federal Reserve which probably would increase the interest sooner. Meanwhile, the oil price continues to go down, Agus explaines at the President office, Jakarta, on Monday (22/12).

However, in the third week, Agus sees the fluctuation of rupiah become stable. We predict the exchange rate of rupiah will remain stable, next challenge is on the first semester of 2015, he says.

The governor of BI assures that BI would always stay alert on the market to keep the volatility of rupiah exchange rate remains stable. He confirms that BI, from time to time, would do some intervention if necessary.

But Agus Martowardoyo firmly says that we could also issue policies that are macro-prudential or communicative or coordination with the government as what we are doing now, not only merely intervention.

Bank of Indonesia would generally explains the condition and strategies of BI, in relation with fiscal. Ministry of Finance would explains about the condition and strategies and perspective from real sector, other related Ministry with it would also conveys their perspectives. Therefore, there would be a well cordination to prepare Indonesia facing end of year of 2014 and the beginning of 2015, Agus explains.