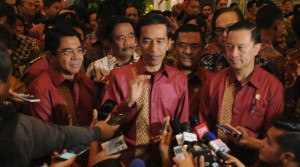 President Joko Widodo (Jokowi) asked the exporters to continue to expand its export markets because their products have the potential to penetrate non-traditional markets.

“I have assigned the Minister of Trade, the Ambassador, for the non-traditional markets that should be pursued. We must not only pursue the old market, traditional markets should we pursue. Because the entire market in countries no matter how small, it has the potential. We have an assortment of products, so it will be a potential and should be encouraged, “said President  Jokowi, told reporters after opening the Trade Expo Indonesia 2015, in JIExpo, Kemayoran, Jakarta, Wednesday (21/10) afternoon.

President Jokowi also conveys that the Government has given the opportunity, especially to the beginner exporters, to get the People’s Business Credit (KUR) with very low interest, only 9 percent.

If the company having problems, President continued, the Government also provides special credit in Indonesian Exports Financing Agency (LPEI). “It can also be used around Rp 1 trillion, an amount large enough to encourage export-oriented industries,” President Jokowi said while mentioning, that in the future the industry that developed by the Government is a labor-intensive industries that are export oriented.

Most importantly, President Jokowi continued, how do our keep trade balance surplus could be maintained. That is the most important.

“The latest data, the surplus remains and the export as well as from the previous month kept creeping up. I think it’s very good,” the President said.

According to the President, with the dollar exchange rate that reached Rp 13,600, then all products in Indonesia benefited, but the most benefit is that the export product by using local raw materials with the high local content.

“That’s a product which benefit greatly,” he said.

The President appoints the sample product of rattan, where in Cirebon which rose significantly, from 1,200 towards 1,700. “It must rise because there is an opportunity to compete,” he concluded.  (UN/RAH/ES)/Sy.