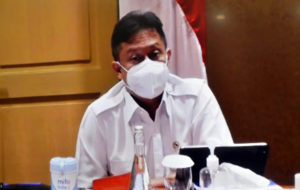 The Government has continued to speed up the national vaccination program in order to achieve herd immunity in tackling the COVID-19 pandemic.

Based on the number of population that has been vaccinated, Budi pointed out that Indonesia ranks fifth in the world.

“To date, 94 million Indonesians have received the first vaccine dose. Indonesia is fifth in the world. Our ranking increased as we topped Japan that is at around 80 million people,” he said, adding that in terms of the number of jabs, Indonesia has administered 148 million doses and ranks sixth in the world.

Furthermore, the Minister stated that his Ministry has received approximately 222 million doses of COVID-19 vaccine and about 193 million doses have been distributed across the country.

“Therefore, the total stock we now have is at around 70 million [doses]. We still have quite a lot. Now we must continue to discuss how to speed up vaccination,” he remarked. (FID/UN) (DH/LW)