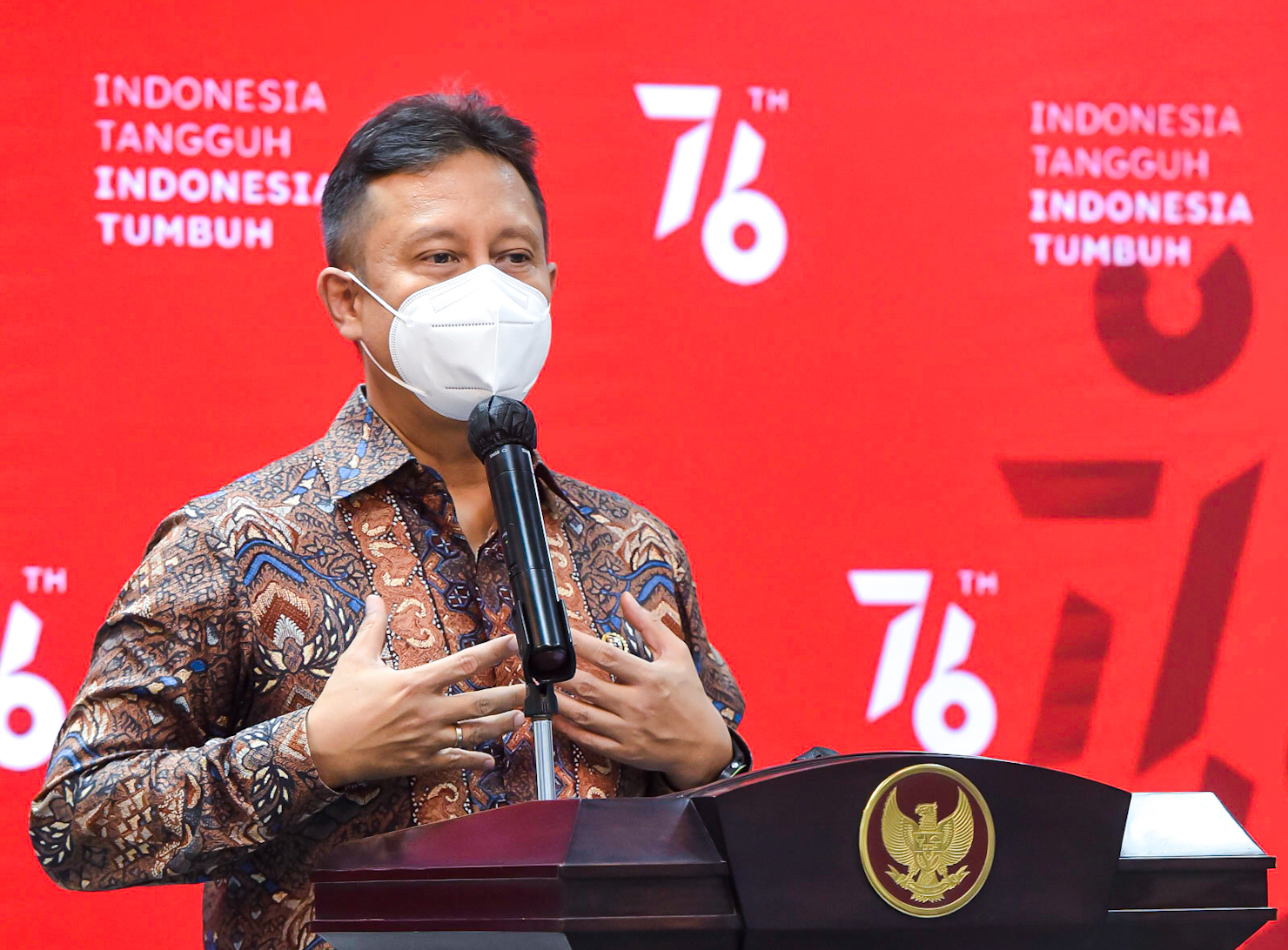 Minister of Health Budi GunadiSadikin delivers his statement in a joint press conference at the Presidential Office, Jakarta, Monday (26/07). (Photo by: PR/Agung)

Following the rising demand for COVID-19 therapeutic drugs amid the surge in COVID-19 cases in Indonesia, Minister of Health Budi Gunadi Sadikin has called on pharmaceutical industry to increase production capacity.

“The increase should be about 12 times bigger. We are aware of this and have communicated with the Indonesian Pharmaceutical Company Association (GP Farmasi) and have anticipated it by importing medicinal raw materials, increasing production capacity, and devising a plan for distribution,” the Minister said in a statement, Monday (26/07).

However, Budi said, it will take about 4-6 weeks for domestic pharmaceutical industry to meet the production capacity needed for the therapeutic drugs.

“We hope that in early August, several medicines that are often sought after by the public, such as Azithromycin, Oseltamivir, and Favipiravir will be able to be available in the market,” he added.

For the record, the national stock for Azithromycin is currently at 11.4 million and a total of 20 domestic factories will participate in manufacturing this drug.

Budi added that the Ministry also continues to coordinate (with related parties) to overcome obstacles in the distribution of this drug.

“Every day, we consult with related parties at GP Farmasi to ensure that the Azithromycin drug can be available at pharmacies,” he said.

Meanwhile, the available stock for Favipiravir in the country is at around 6 million and a number of drug manufacturers will immediately increase their production capacity.

“There are several domestic manufacturers who will soon increase their stock of Favipiravir, including state-owned pharmaceutical company Kimia Farma which can [produce] two million per day. The plan is that PT Dexa Medica will also import 15 million in August and we will also import 9.2 million from several countries starting in August,” he said.

According to Budi, to tackle the Delta variant, five professional medical organizations in Indonesia have recommended the use of Favipiravir.

“We hope that in August, we will have a domestic production capacity of between 2-4 million tablets per day. Meanwhile, we have 12 million Oseltamivir in stock until August, but this will slowly be replaced by Favipiravir,” he said.

In addition to the three therapeutic drugs, the Government, Budi added, also continues to secure supply of drugs that currently still depend on imports, such as Remdesivir, Actemra, and Gammaraas.

The Minister also underlined that the drugs will be imported gradually to the country.

For Remdesivir, 150,000 will come in July and 1.2 million in August. Indonesia is also working on being able to produce this drug domestically.

“These drugs [Azithromycin, Oseltamivir, Favipiravir, Remdesivir, Actemra, and Gammaraas] are prescribed drugs. For three drugs, Gammaraas, Actemra, and Remdesivir, they must be injected and can only be done in a hospital. So, please let these drugs be consumed/used according to the procedure,” Budi remarked.

The Minister also reminded the public not to stock up on these drugs.(DND/UN) (FI/EP)