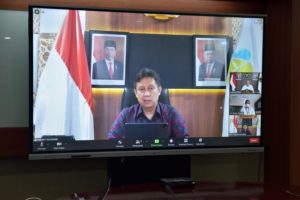 Minister of Health Budi Gunadi Sadikin has confirmed that COVID-19 vaccine stocks in the regions is sufficient for national vaccination drive for the next one month.

“There are approximately 47 million [doses] in stock in provinces, regencies, and municipalities. The amount is sufficient for next one month. Since Indonesia’s vaccination rate is around 50 million [doses] in five weeks, the stock in provinces, regencies, and municipalities will be enough for another month,” Budi said in a press statement after joining a limited meeting on the evaluation of public activity restrictions (PPKM), via video conference, Monday (01/11).

The Minister added that the Ministry has received 252 million doses of COVID-19 vaccines of which 241 million doses have been distributed to regions throughout the country.

The Minister is optimistic that Indonesia can pass the target of vaccination coverage set by the World Health Organization (WHO) that is 40 percent of the population will be fully vaccinated by the end of 2021.

“Based on our calculation, Indonesia may reach 60 percent [full vaccination coverage], exceeding the target set by the WHO,” he stated. (FID/UN) (RAS/MMB)