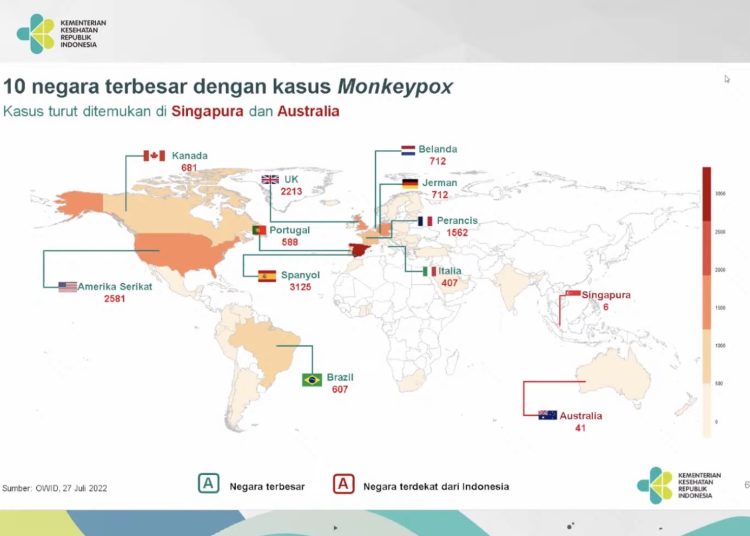 The Government through Ministry of Health Wednesday (07/27) has announced that as of July 27, 2022 it confirmed no monkeypox cases recorded in Indonesia.

“Earlier, there were nine probable cases of monkeypox in Indonesia. However, after being tested, all nine people were tested negative for monkeypox,” Ministry of Health’s Spokesperson Moh. Syahril said in his press statement on “Latest Update of Monkeypox Case in Indonesia”.

Since the first monkeypox case was confirmed on May 6, 2022 in the UK, the case has continued to spread globally. As of July 27, 2022 there are 17,156 people in 75 countries who have tested positive for monkeypox, 69 out of 75 countries are not entering endemic phase yet. For the moment, Spain is the most affected country in the world, followed by the US and France.

On that occasion, Syahril said that a number of mitigation measures, including strengthening of surveillance on entry points in land, sea, and air, have been taken by the ministry in order to prevent monkeypox cases from entering Indonesia.

Another mitigation measure being taken is that Ministry of Health has ordered all health agencies in provinces and regencies/cities, the port health authorities (KKP), laboratories, hospitals, community health centers (Puskesmas) and other health facilities to raise awareness on monkeypox as Public Health Emergency of International Concern (PHEIC) by WHO on July 23, 2022.

Syahril emphasized that observing health protocols is still the best way to prevent monkeypox considering the characteristic of the symptoms is self-limiting disease which is like COVID-19 symptom. It means that the disease can be cured without treatment.

Syahril further said that even though monkeypox is self-limiting disease, it has the potential to affect secondary infection, bronchopneumonia, sepsis, encephalitis, and corneal infection that can lead to blindness.

“If you are having fever with the rash, please immediately go to health facility around you,” he remarked. (PR of Ministry of Health/UN)(AP/MUR)