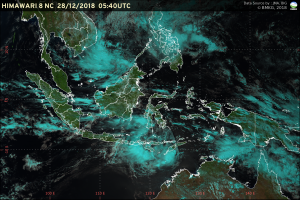 Much of Indonesia is covered up with lower air temperature due to low air pressure centers around the Philippines and the South China Sea, according to the Meteorology, Climatology and Geophysics Agency (BMKG)s Deputy for Meteorology Mulyono Prabowo in a press release on Thursday (27/12).

Meanwhile, the dominance of low air pressure around Australia is quite significant and causes wind slowdown and collide around the southern regions of Indonesia, he said.

Mulyono further said that these conditions are expected to potentially increase rainfall in most regions of in the country between 28 to 31 December 2018.

According to the release, potential of heavy rains are expected to occur in:

Also, the release also stated that rough waves are likely to occur in:

Meanwhile, very rough waves are expected to occur in:

The BMKG, Mulyono continued, urged the public to remain vigilant about the potential for hydro-meteorological disasters such as floods, flash floods, landslides and strong winds in the next few days, especially for regions that have seen high intensity rain.

To the people who live and work in coastal areas with the chance of rough waves, please remain alert, Mulyono concluded. (Humas BMKG/EN)