Heavy Rain Expected in Some Regions Due to Typhoon Mangkhut: BMKG 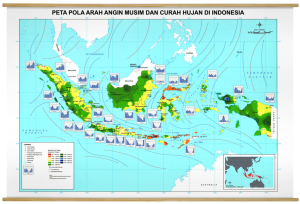 Altough Typhoon Mangkhut has moved away from the Indonesian territory since several days ago, the super typhoon has impacted weather in Indonesia as it is indicated by an attenuation of air mass movement from Australia to Indonesia, according to Deputy for Metereology Division of the Meteorology, Geophysics and Climatology Agency (BMKG) Mulyono R. Prabowo.

We urged the people to brace for bigger potentials of rain in some parts of the country, Mulyono said on Wednesday (19/9).

He added that a cyclonic circulation in South China Sea, a rise in wet air humidity in the atmosphere between altitudes of 1,500 metres and 3,000 meters, and a change in speed and direction of the wind at the lowest layer of Earth’s atmosphere (1,000 meters) that will form cumulonimbus clouds in some parts of Indonesia have been detected.  The dynamics in the atmosphere is forecast to increase chances of heavy rain with thunder and lighting, as well as strong winds in several parts of Indonesia for the next three days (20-22 September 2018) Mulyono added.

For those who want to get the latest information, the BMKG provides a 24-hour weather information service via call center 021-6546315/18, our website http://www.bmkg.go.id, social media @infobmkg, and you may also contact the nearest BMKG office. (EN/Humas BMKG/ES) (RAS/EP/Naster)