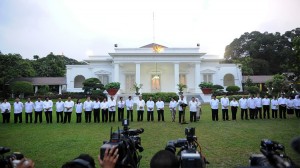 Having been long awaited by the public, President Joko Widodo (Jokowi) and Vice President Jusuf Kalla (JK) finally announced the line-up of their cabinets ministers. This cabinet is named the Working Cabinet.

Here are the names of the 34 ministers announced directly by President Jokowi.

1.    Minister of State Secretariat: Pratikno; Rector of Gadjah Mada University Yogyakarta, Professor of Politics and Government, a once village-boy who then succeeded in cities

3.    Coordinating Minister of Maritime Affairs: Indroyono Susilo, highly-experienced doctor, the Food and Agriculture Organizations (FAOs) director of fisheries and sea farming. I ask him to safeguard the maritime potential in all territory of the Republic of Indonesia, Jokowi said.

4.    Minister of Transportation: Ignasius Jonan, President Director of PT KAI (Indonesias state-owned rail company), professional manager who is experienced in public transportation, often works overtime and spends many of his nights sleeping in the railway coaches. Now, in addition to the railway coaches, he can spend his nights sleeping in the planes or in the ships, President Jokowi said.

5.    Minister of Maritime Affairs and Fisheries: Susi Pudjiastuti, entrepreneur woman, hard worker who started from zero but then made many breakthroughs and succeeded in developing transportation related to maritime affairs

6.    Minister of Tourism: Arief Yahya, chief executive officer (CEO) of PT Telkom (Indonesias state-owned telecommunication company), highly-skilled professional, recipient of the Marketer of the Year 2013 award. Watch him out because, in addition to tourism, he can even promote you, certainly by means of information technology, Jokowi said.

7.    Minister of Energy and Mineral Resources: Sudirman Said, reliable business manager who is consistent in combating corruption. He was once the executive director of Transparency Indonesia and is now the President Director of PT Pindad (Indonesias state-owned land-systems and weapons maker).

9.    Minister of Home Affairs: Tjahjo Kumolo, professional politician who is resolute and highly skilled in building dialogs with the public and regional governments. By chance, he also comes from Solo, Jokowi said.

11.  Minister of Defense: Ryamizard Ryacudu, intellect soldier, former Army Chief of Staff, who is democratic and loyal to the Unitary State of the Republic of Indonesia. I ask him to take charge of our defense, Jokowi said.

12.  Minister of Law and Human Rights: Yasona Laoly, professional politician, expert in law, who is experienced especially in legal protection. He is expected to bring improvements to Indonesian law.

15.  Coordinating Minister of Economic Affairs: Sofyan Djalil, expert in economic and financial strategies, an Acehnese, to be the main leader of the Working Cabinet

18.  Minister of Cooperatives and Small and Medium Enterprises: AA Puspayoga, professional from political party who is very active in developing entrepreneurship

20.  Minister of Trade: Rahmat Gobel, professional who has shown proven experience in the development of national trade. I assign him to develop Indonesias trade, President Jokowi said.

22.  Minister of Manpower: Hanif Dhakiri, professional from political party who has shown dedication and has strong networking in manpower

24.  Minister of Forestry and the Environment: Siti Nurbaya, doctor in planning, former Secretary General of the Ministry of Home Affairs, hard worker

25.  Minister of Agrarian Affairs and Spatial Management/Head of the National Land Agency (BPN): Ferry Musyidan Baldan, professional from political party who has been active in managing and dealing with agrarian matters

26.  Coordinating Minister of Human Development and Culture: Puan Maharani, female politician who is highly-experienced and has proven experiences as a leading figure in the 2014 general election

27.  Minister of Religious Affairs: Lukman Hakim Saefudin, hard and zealous worker who has proven experiences in bringing changes. I demand that our reform agenda must be continued, Jokowi stated.

33.  Minister of Youth and Sports: Imam Nahrawi, professional politician who has strong networking in youth and sports

34.  Minister of Villages, Disadvantaged Regions, and Transmigration: Marwan Jafar, politician, professional, who has strong networking and has written many books concerning pro-people infrastructures.