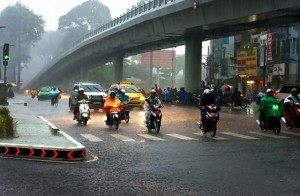 The Meteorology, Climatology, and Geophysics Agency (BMKG) urged the public to be aware of the increase in rainfall in some regions of Indonesia.

We predict the increase to occur in most regions of Western Indonesia, Deputy for Meteorology at the BMKG Drs. Mulyono R. Prabowo, M.Sc, said in his statement in Jakarta, Saturday (27/10).

The increase, according to Prabowo, was caused by several factors, including the presence of cyclonic circulation around the Sumatra region which caused a concentration of air mass in the region.

The air mass concentration causes air conditions to be more humid that support the making of rain clouds, Prabowo said, adding that this situation will last for the next 3 days.

Prabowo said that the circulation activity will decrease and be replaced by the wind convergence area that extends from Sumatra to northern Kalimantan. The convergence will also support rain cloud forming.

On the contrary, Prabowo continued, the rain potential is predicted to remain minimal in eastern areas of Java Island to East Nusa Tenggara, Sulawesi, Maluku, and Papua. The lack of rainfall is caused by the dominance of the dry air mass observed in the region and the wind patterns that tend to be scattered which inhibit the forming of rain clouds.

For those who want to get the latest information from the BMKG, the BMKG opens a 24-hour weather information service through call center 021-6546315/18; http://bmkg.go.id; follow @infobmkg on Twitter; or directly contact the nearest BMKG office. (Humas BMKG/ES)