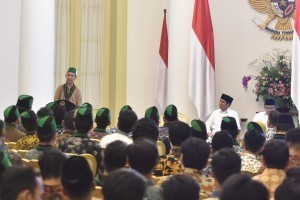 In a bid to counter radicalism and terrorism in the country, Executive Board of the Islamic Student Associations (HMI) invites all relevant stakeholders to rebuild and strengthen security system reforms.

The call is one of the nine ideas titled the Nine People’s Demands (Senturi) proposed by General Chairman of HMI Saddam Al-Jihad before President Joko Jokowi Widodo at the opening of the 2018 HMI Education and Training at Bogor Presidential Palace, West Java, Friday (5/10) afternoon.

“One constructive idea relating to security system reforms is how to counter radicalism and terrorism, which can be done together with stakeholders of the nation and the state,” Sadam said, adding that HMI also puts emphasis on the importance of youth government.

“It aims to challenge the youths to actively and positively contribute to the sustainability of the nation and the state in the future,” he added.

For the record, the Nine People’s Demands are as follows:

Also present on the occasion were Minister of State Secretary Pratikno, Mayor of Bogor Bima Arya, and Bogor Regent Nurhayanti, as well as a number of HMI executive leaders. (DNA/JAY/ES) (MUR/EP/YM/Naster)