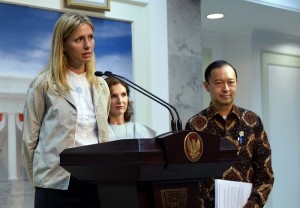 Head of Sustainability for H&M Helena Helmersson, Ambassador of Sweden to Indonesia Johanna Brismer Skoog and Minister of Trade Thomas Lembong at the Presidential Office, (24/2)

President Joko Widodo accompanied by Minister of Trade Thomas Lembong received a courtesy call from the delegation of H&M Global Production at the State Palace, Jakarta, on Wednesday (24/2) morning. The delegation was led by the Ambassador of Sweden to Indonesia Johanna Brismer Skoog and H&Ms Head of Sustainability Helena Helmersson.

Besides having a meeting with the delegation of H&M Global Production, a famous international fashion company from Sweden, on that occasion, the President also had a dialogue with businesspeople in fashion industry, as well as Indonesian artists and designers.

Minister of Trade Thomas Lembong said this meeting is highly favorable to Ministry of Trade because textile and textile product industries contribute a lot to Indonesias export.

So far, the export value of textile and textile products is around US$ 13 billion per year and absorb around 2.7 million labors, the Minister said when delivering a statement at the Presidential Office, on Wednesday (24/2) afternoon.

According to him, the H&M has invested in Indonesia since 1996, and 98% of its products that are made in Indonesia, are exported to numerous countries. The Minister also thought that fashion industry is one of Indonesias future industries because it goes well with creative culture. There are a lot of innovative young people involve in fashion industry and they make use of our excellence in craftsmanship, he said.

In that meeting, the Government of Sweden, the H&M, businesspeople in fashion, textile, and arts industries delivered a number of inputs to boost the development of textile and fashion sectors.

According to the Minister, Sweden is one of important investor countries for Indonesia and hopefully the cooperation of the two countries will continue in order to support private sectors in Indonesia.

He added that this meeting is related with the revision of negative investment list that was issued by the Government a few weeks ago. Based on that list, retail sector gives more opportunity for foreign investors.

According to the Minister, H&M is one of ideal examples. Thomas explained that Indonesia gives more access to its market and, at the same time, this company must carry out procurement expansion, procurement sourcing and build a factory to supply its stores in Indonesia as well as in all over the world.

Its the trade off. In one side, we open an acces to the market and on the other side, they will increase their production capacity, procurement, and sourcing for export, he added.

Therefore, besides expansion, the H&M will also establish a cooperation in creative industry management. The Minister of Trade will also try to create an ecosystem and atmosphere for fashion industry to make it more innovative and to upgrade its class.

Thus, besides expansion, I also want to upgrade the class. I want to add more aspects, for example designor special textiles, so that the added value will be bigger. So, it is not just a textile factory, he explained.

Head of Sustainability for H&M Global Production, Helena Helmersson, said that the purpose of this meeting is to having a discussion on fashion industry sector as well as to develop fashion industry market and its potential in Indonesia. Her company wants to expand its retail products and she admitted that she sees a big potential to carry out the expansion.

Were being here to learn more the market and its potential. And its also force to continue the growth of production in Indonesia, Helena Helmersson said. (FID/ES)(MMB/YM/Naster)