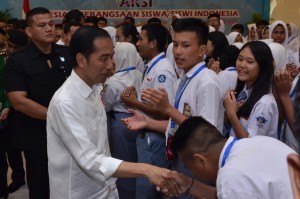 On the occasion, President Jokowi said that Indonesia is a great country with 263 million people, 514 districts / cities, and 34 provinces.

The President then reminded the AKSI participants not to be contested because of diferent interests, including political interest. This is very dangerous, he added.

This country, continued President Jokowi, needs the young people to compete with other countries. If we are not united, we will suffer a great loss, he said.

President Jokowi gave one example on the benefit of unity. He recalled when Indonesia hosted the 2018 Asian Games in August, when all elements of the community were united, Indonesia succesfully secured 31 gold medals and ranked 4th in the Games.

President Jokowi also added that Indonesia will face greater challenge in the future. However, the President believes that these children have the potential and strength to compete with other countries.

Also present on the event were Minister of Education and Culture Muhadjir Effendy. (FID/OJI/ES) (STU/LW/Naster)