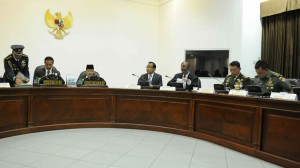 In his introduction, President Jokowi argued, after looking directly into the scene (Pangkalan Bun) related to SAR operations to AirAsia, he already saw clearly the difficulty of field conditions that faced.

“But Alhamdulillah since yesterday until today everything is going well,” said President Jokowi.

Therefore, in  the limited meeting, President Jokowi asks more detailed report related matters, either with the operation or the weather, and other possibilities.