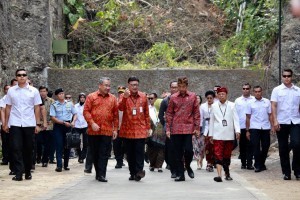 Minister of Home Affairs Tjahjo Kumolo explained that the planned budget allocation for urban village fund would be different from that of the village, considering the coverage of urban village area is smaller than village.

The amount of the budget allocation is certainly different from that of the village. The area of urban village is smaller, although the number of population in urban village is larger than the village, but the problem is different. The infrastructure in the village is more complex and broad, Tjahjo said at the Garuda Wisnu Kencana (GWK), Badung Regency, Bali, Friday (19/10).

The Government’s strategic plan to allocate urban village funds, as stated by President Joko Jokowi Widodo in the opening of the 20th  National Workshop on Appropriate Technology and the 2018 Urban village/Village Development Innovation Week (PINDesKel), according to Tjahjo, has taken into accounts the real circumstances on the ground towards urban village development, adding that many urban villages have a small budget, so that the allocation of urban village funds is deemed necessary to support equitable development in the urban village administration.

To date, it turns out that a number of urban villages have indeed limited budget and not been able to put a position as a urban village in a city, both regarding facilities and infrastructure as well as public facilities, Tjahjo explained, while asserting that Urban village Government together with Village Government has been the vanguard of home government unit that provides direct services and present in the midst of the people at all times.

However, the level of public satisfaction towards the leading government services (Urban village Heads and Village Heads) often serves as a barometer for the public in assessing government performance.

The allocation of urban village funds is a necessity to improve the quality of public services and certainly before the policy is implemented, the technical rules will be formulated so as to properly benefit the public, Tjahjo concluded. (Ministry of Home Affairs/ES) (MUR/AW/YM/Naster).