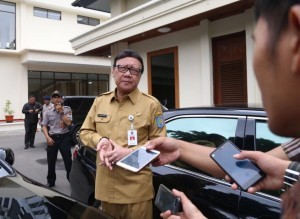 Although several regional heads, be it Governors, Regents or Mayors have been caught in sting operations held by the Corruption Eradication Commission (KPK) for alleged bribery or gratification, Minister of Home Affairs Tjahjo Kumolo affirmed that there are still many regional heads who are clean and have integrity.

“Of the more than 500 regional heads in Indonesia, some are caught in the case, mostly due to corruption case. However, there are still many who are clean and have integrity,” Tjahjo told reporters after attending a Plenary Cabinet Meeting on Government Work Plan at the State Palace, Jakarta, Monday (2/12) afternoon.

Indeed, the Minister admitted that he was very concerned about the arrests of some regional heads. Moreover, President Joko Jokowi Widodo, on every occasion when meeting with regional heads, always reminded all to be careful in managing regional budget. “We also constantly reminded them to avoid areas prone to corruption especially budget planning, goods and services spending, buying and selling positions,” Tjahjo explained.

The Minister also requested that those being exposed to the case be cooperative with law enforcement officers.

Regarding the possibility that the regional heads affected by the corruption case needs funds for Regional Head Elections (Pilkada), the Minister said it is likely to happen but it is casuistic.

Meanwhile, when asked whether the party’s support can be withdrawn from the candidates, according to the Minister, there is a rule that supports the party can revoke its support if the candidate is sick or absent.”Or have a permanent legal decision. But this is not yet. Last year, there was a candidate who had been in jail running for elections and won. Once there is a legal decision and found guilty, so the candidate cannot run for office,”the Minister concluded. (Information Center of the Ministry of Home Affairs/ES) (MUR/MMB/YM/Naster).