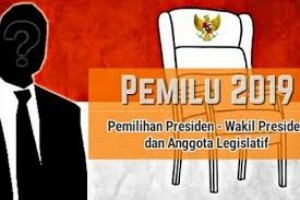 E-vote will not be adopted in 2019 simultaneous election because it is not yet regulated in Law Number 7 of 2017 on General Elections, according to Minister of Home Affairs Tjahjo Kumolo

It is very clear and firm that a valid vote is by ballot. E-vote is not yet regulated so it is impossible to implement it in the 2019 election, the Minister said in Jakarta, Tuesday (11/9).

Regarding the use of noken system which was carried out during previous elections specifically for several regions in Papua, Tjahjo said, there is also no room its use. The 2019 election will run on one man one vote by casting ballots, he said.

In the meantime, the Ministrys Head of Information Center Bahtiar said that Article 353 of the Election Law regulates several points, namely a vote for the election that is done by voting once on the number, name, photo of the candidate pair, or a logo of the political party proposing it in one box on the ballot for the election of the President and Vice President.

At point B is also stated that a vote for election is done by voting once at the number or logo of the political party, and/or the name of the candidate member of the House of Representatives (DPR), Provincial Legislative Council (DPRD), DPRD at regency/city level for the Legislative Election, Bahtiar said.

Furthermore, Article 353, paragraph 1 point C of the Election Law states that voting is done once at the number, name or photograph of the candidate for the election of the Regional Representatives Council (DPD) members.

For noken system, Bahtiar added, it has been ratified through the decree of the Constitutional Court (MK) Number 47-81/PHPU.A-VII/2009 by adjusting to indigenous cultures of Papua people and was implemented in previous 2014 Election.

The use of noken system accommodates the Constitutional Court Decision Number 47-81/PHPU.A-VII/2009   to respect local cultures and to avoid conflicts, Bahtiar said.

The Election Law, according to Bahtiar, does not stipulate noken system because it should be reviewed case by case and the General Election Commission (KPU) of Papua will determine in which areas will use the system. Bahtiar also expressed hope that the number of regions that use the system will decline each election period and its technical arrangement will be regulated in KPUs Regulation. (Puspen Kemendagri/ES) (GWH/EP/Naster)