Home Minister: Fake e-KTP Can Not Be Used 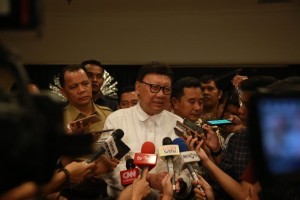 Minister of Home Affairs Tjahjo Kumolo ensured that the residents database is not breached and the findings of a sack of electronic resident identity cards (e-KTP) in Duren Sawit, East Jakarta does not affect the database because the perpetrators only sell blank e-KTPs and they do not have any access to the database.

The blank e-KTPs that are sold (illegally by the perpetrators) cannot fully functioning like a real e-KTP, because the real e-KTP printed by a programmed special printer which only owned by the Ministrys Directorare General of Population and Civil Registration (Dukcapil) as the sole holder of the residents database, Tjahjo said in Jakarta, Monday (12/10).

Regarding the findings of 2,158 pieces of e-KTP in Duren Sawit, the Minister said that the police are still investigating the case. However, he suspected that the e-KTPs disposal on Duren Sawit was an intentional act because the sack of e-KTPs was disposed in a place that can be easily seen by the public. For the record, one day earlier the police uncovered a case of illegal online selling of 10 blank e-KTPs.

Regarding this problem, Minister Tjahjo explained preventive measures to be taken in order to avoid similar cases, such as to reinforce the Standard Operating Procedure on the Ministrys Population and Civil Registration (Dukcapil) Directorate General for e-KTP management and to tighten the process supervision. The public are also encouraged to report any findings of counterfeiting and misuse of e-KTP to the Ministrys Hotline number (1500-0537). The Minister also urged the people to cut expired e-KTPs in order to avoid its misuse.

In the meantime, the Ministrys Head of Information Center Bahtiar said that both cases are suspected to worsen the situation of the upcoming 2019 Election. We entrust the investigation of the cases to the police, he said, adding that the people must not provoked by the perpetrators. (Puspen Kemendagri/ES)