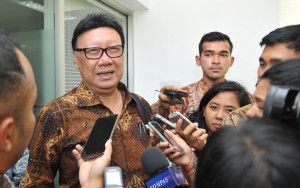 Minister of Home Affairs Tjahjo Kumolo said that the Government still imposes a moratorium on regional expansion; thus, the Government has not been able to fulfill the request of the 314 regions proposing to become New Autonomous Regions (DOB).

For that reason, the Government decides to continue to postpone the request for 314 New Autonomous Regions (DOB), he added.

Tjahjo stated that nearly 80 percent of the budget for 514 regencies/municipalities in Indonesia are coming from the central governments budget.  So, it requires a thorough calculation and preparation to add more autonomous regions. Aside from budget issue, a new region needs to prepare its own human resources, the regional police, the regional military and others facilities. These must be well considered, Tjahjo said.

The Minister went on to say that he understands the arguments for regional expansion are to speed up regional development, public services and welfare of the people, but it is also important to consider the budget availability and human resources capabilities.

The Government, particularly Ministry of Home Affairs, will continue to review and hear regional aspirations, along with opinion from both the Regional Representatives Council (DPD) and the House of Representatives (DPR), said Tjahjo, adding that he cannot determine when to withdraw the moratorium. (Public Relations of Ministry of Home Affairs / ES)