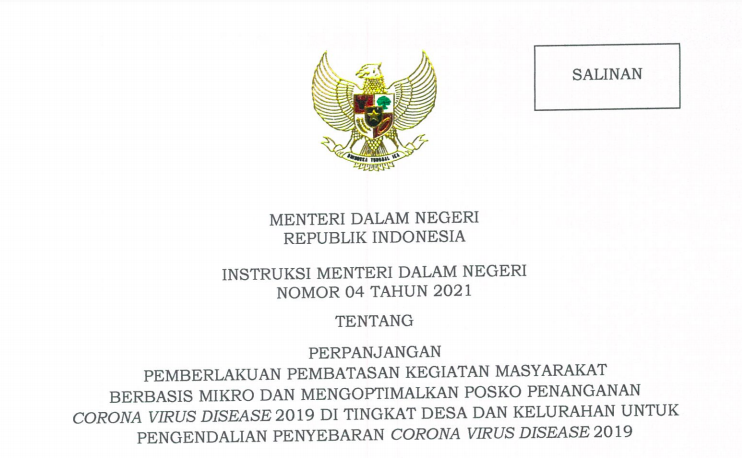 The issuance is a follow-up on President Joko “Jokowi” Widodo’s directives to enforce PPKM and establishment of COVID-19 handling post at the lowest administration level.

For this reason, the Minister ordered all governors, regents, and mayors in Java and Bali Islands to enforce micro-scale PPKM in their respective regions.

For green zone with no case of COVID-19 in the neighboring units, those who are suspected of COVID-19 will be tested and they will be monitored regularly.

“For yellow zone where there are 1-5 houses in the neighboring units with COVID-19 confirmed cases within the last seven days, the control scenario is to find the suspected and trace the close contacts. Those with confirmed COVID-19 and their close contacts must respectively undergo self-isolation with strict monitoring,” Tito said.

Furthermore, in orange zone where there are 6-10 houses in the neighboring units with the confirmed cases within the last seven days, the control scenario is by finding and tracing the suspects and their close contact, impose self-isolation on those with confirmed cases and strict monitoring on their close contacts, as well as closing houses of worship, playground, and public places excluding essential sectors.

Meanwhile, for red zone where there are more than 10 houses in the neighboring units with confirmed cases within the last seven days, the PPKM will be enforced at the neighboring units by finding and tracing the suspected cases and close contacts, imposing self-isolation or centralized isolation with strict monitoring, closing houses of worship, playground, and public places excluding essential sectors, prohibiting crowd of more than three people, limiting those entering and leaving the neighboring units from 8 p.m. onwards, suspending social activities that may potentially cause crowds.

The implementation of the micro-scale PPKM involves all elements of the communities and includes the establishment of posts at villages and sub-districts for monitoring, coordination, and evaluation mechanisms.

For the record, the budget of the micro-scale PPKM at the village level will be sourced from the Village Fund and can be supported by other village income. Meanwhile, the budget at the sub-district level will be borne by regencies/municipalities.

Posts at villages will be led by Village Heads while posts at sub-districts will be led by Sub-districts Heads. These posts will be assisted by public protection unit (Satlinmas), the Indonesian National Defense Forces’ village supervisory non-commissioned officers (Babinsa), community police officer (Babinkamtibmas), and community figures.

It was also stated that the PPKM provisions include the implementation of 50 percent Work From Home (WFH) and 50 percent Work from Office by enforcing stricter health protocols as well as online learning.

Houses of worship are allowed to operate with 50 percent capacity, while public facilities and social activities that may attract crowds are prohibited. Public transportation working hours and capacities should also be adjusted.

In addition, Tito also called on regional governments at provinces, regencies/municipalities, villages, and sub-districts to further enforce discipline in the implementation of health protocols, to strengthen tracking system, tracing management, and treatment including improvement of the capacity of healthcare units as well as to intensify coordination between regions. (PR of Ministry of Home Affairs/UN) (FI/MMB)