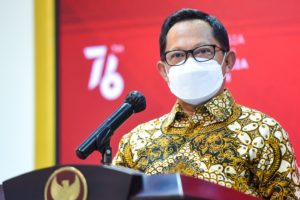 Minister of Home Affairs Muhammad Tito Karnavian Thursday (03/10) urged all regional leaders, including governors, regents, mayors, as well as other ranks of regional governments including members of the Regional Legislative Council (DPRD), heads of ministry’s departments, and all ranks at district, sub-district, and village levels to file their annual tax returns (SPT) before the deadline on March 31, 2022.

The SPT, the Minister continued, can be filled through e-Filling application or regional tax offices in the regions.

According to Tito, this initiative will motivate the public to file their SPT on time considering the positive activities done by the regional leaders can set as examples for the communities.

Tito added that by filling the SPT, obligations as citizen can be done, people also comply with national laws, and the country will receive more added revenues.

Tito also said that state revenue from taxes will also further transfer to regional governments through the mechanism of Regional Cash Transfer and Village Funds (TKDD).

“So with more tax revenue, it is expected that there will be the more regional cash transfers,” Tito said, adding that all ranks of regional governments including state civil apparatus (ASN) are also urged to file their SPT on time.

He further said that for ranks of local governments, especially regional heads who are late to file their SPT, they will be penalized in accordance with the provisions of laws and regulations on taxation. (PR of Ministry of Home Affairs/UN) (AP/EP)