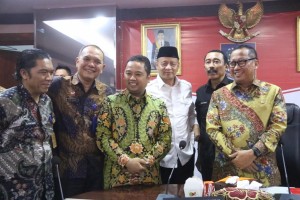 Both parties have agreed to revoke their respective reports submitted to the police. Furthermore, the settlement process will be facilitated by Banten Governor.

“Earlier, we have an agreement that both parties would withdraw all reports. After that, public services (related to water, electricity, and waste) will run normally. Finally, the normative questions related to license and spatial plan will be resolved as well as possible,” Hadi told reporters after the mediation at Ministry of Home Affairs office, Jakarta (18/7), adding that a further agreement will be stipulated in Tangerang Spatial Planning Regulation Draft.

Hadi stated that after the agreement, there are some licensing requirements to be completed. There are some lands of Ministry of Law and Human Rights, he added, which have not yet been submitted to the Tangerang Municipalities. So, in the future, the submission of lands to Tangerang City Government, as state property, will be facilitated by Ministry of Public Works and Public Housing for matters related to building and Ministry of Finance for matters related to social and public facilities.