I Believe in Greatness of Women, President Jokowi Says 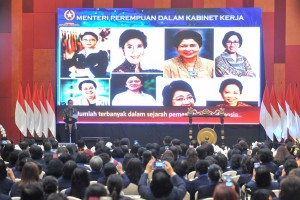 After four years leading the nation, President Joko Jokowi Widodo unveiled the reason he appointed eight women in his Cabinet.

For the record, it is the first time in Indonesian history that the Government has the most number of women within the Cabinet.  Previously, only 3 to 4 women were appointed as ministers.

I believe in the greatness of women. I also believe their precision, toughness and readiness to work, President Jokowi said in his keynote speech at the opening ceremony of the 20th Indonesian Women Catholic (WKRI) Congress held at Grand Mercure Hotel in Central Jakarta, Tuesday (30/10).

On that occasion, President Jokowi expressed hope that the role of women organization in building the nation and in building Indonesia, including the role of the Indonesian Women Catholic Community, can continue to grow.