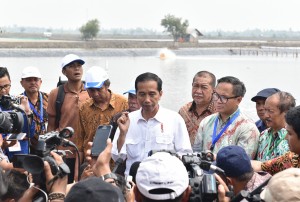 In response to journalists question regarding the issue of reclamation project in Jakarta Bay, President Joko Jokowi Widodo asserted that he never issued a permit when he was still Jakarta Governor nor when he is the President.

In relation to Governor Regulation Number 146 of 2015 on Technical Guidelines for Building and Licensing Services and Reclamation Facility of the North Coast Strategic Area of Jakarta, President Jokowi said that the the Governor Regulation serves as a guideline to propose a permit.

The Governor Regulation is a guide in case if you ask for permission. It did not mean that I gave the permission to run reclamation project, the President said.

In the meantime, President Jokowi added that the measures to improve Indonesias Ease of Doing Business (EoDB) index will continue to be improved.

Before this, our Ease of Doing Business index was ranked 120, then it improved into 106 and 91, and now our EoDB index is at 72. It means we are already better than China, India, or Brazil, the President said.

President Jokowi also said he has told Coordinating Minister for the Economy to raise the target for next year into 50 and 40 in the following year.

It means we have to do total reforms, starting from permit matter, power supply matter, property matter. Everything has to be better, President Jokowi said.

The President also hopes that in the future, small enterprises, micro enterprises or big companies can enjoy ease in obtaining permits when they want to start a business or do business expansion.

Because after that, we can create new job opportunities, the President said, concluding the press conference. (RAH/JAY/ES/EN)(EP/YM/Naster)