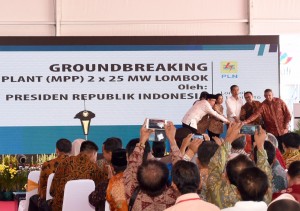 President Joko Jokowi Widodo said that he will always monitor the progress of the ongoing development projects.

The President made the statement after leading a groundbreaking ceremony of Jeranjang Mobile Power Plant (MPP) project with the capacity of 2×25MW in Kebunayu Village, Gerung District, West Lombok Regency, West Nusa Tenggara Province, on Saturday (11/6).

I come here today to directly see the progress of every development project that we have implemented, the President said.

President Jokowi also admitted that most of the power plant projects are still in the form of mobile power plants (MPP); yet, he said that in the future, the Government will consider developing hydro power plants and bigger steam-fuelled power plants (PLTU).

Once these mobile power plant projects are implemented, we want to add the number of mobile power plants in the provinces that still suffer from electricity shortage so there will be no blackouts in those provinces. Afterwards, we will expand the projects, the President said, adding that the expansion process must take into account the development every year, the progress, and the demands.

The Government has also started thinking about conversion to clean, renewable energy, the President said.

Several regions such as West Nusa Tenggara, are still experiencing energy shortage. Insya Allah, in August this year, the mobile power plant project in West Nusa Tenggara will be completed. the President said.

On that occasion, President Jokowi also mentioned about economic growth that must be anticipated.

When there is economic growth, we have to anticipate it. Otherwise, the growth will stop or even decline, the President said, adding that economic growth in West Nusa Tenggara reaches 9.9 percent.

Regarding the completion of a number of halted projects, the President said that the Government will discuss the matter in a limited cabinet meeting after it was re-checked by the Development and Finance Surveillance Agency (BPKP).

President Jokowi further said that the acceleration of MPP should be finished within 6-7 months.

However, he added, for a long-term plan, the Government will have to consider the costs and choose a cheaper fuel for power plants and remain using coal.

In the future, because we have water, river, and hydro potentials, thus these potentials should be used, the President said.