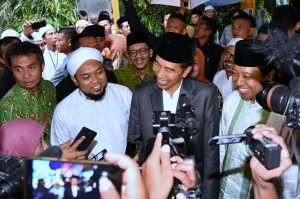 The President was not offended with this action. I think it is good to have someone to remind us, says the President in Salafiyah Syafiiyah Islamic Boarding School Sukorejo, Situbondo, East Java, Saturday (3/2).

The President also says that he will invite several representatives of BEM UI to visit Papua to see the real situation as well as handling measures done by the Government.

I will probably send the Chairman and members of BEM UI to Asmat. Let them see the real condition as well as big problems in regions, especially Papua, the President further says. (BPMI/EN)(MMB/YM/Naster)