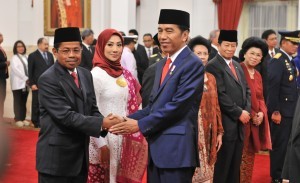 President Jokowi congratulates Idrus Marham, who is accompanied by his spouse Ridho Ekasari, for his new position as Minister of Social Affairs, at the State Palace, Jakarta, Wednesday (17/1) morning (Photo: JAY/ PR)

Golkar Secretary General Idrus Marham, on Wednesday (17/1), is inaugurated by President Joko Jokowi Widodo as the new Minister of Social Affairs replacing Khofifah Indar Parawansa who resigned from her post since she is going to run in the East Java gubernatorial elections.

Asked by the journalists after the inauguration ceremony, Idrus says that he will immediately start his work and study all programs in the Ministry of Social Affairs. I will identify and study the policies made by Ibu Khofifah, he says.<>

The new Social Affairs Minister, who was born in Pinrang, South Sulawesi, is going to learn a lot from the previous ministers and their policies that based on his note, have reduced poverty rate in Indonesia up to 1.2 million people. He also explains that it needs a process to reduce poverty. This process includes the implementation of the governments programs.

He further says that he and the President share the same commitment to work for the prosperity of the people. (UN/JAY/ES)(MMB/YM/Naster)