Ill Do My Best to Serve This Country, President Jokowi Says 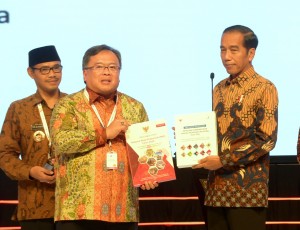 President Joko Jokowi Widodo has said that he will do his best to serve the country in the next five years.

“In the next five years, I cannot run again (for the Presidency). I have nothing to lose and will do my best to serve my country, the President said in his remarks during the opening of the 2019 National Development Planning Conference in Jakarta, Thursday (9/5).

Regarding bureaucratic reforms and simplification of licensing procedures, President Jokowi said that the Government would start to dissolve unnecessary and inefficient government institutions that do not make a real contribution to the country.

Regional governments, he added, also need to do the same, considering that small organizations will make it easier and more flexible for policy making in the face of rapid global changes.  We must break our old, bad habit,” he said.

On that occasion, President Jokowi also said that Indonesia has been facing current account deficit and trade deficit for more than twenty years due to complicated licensing procedures in exports and investment, both in the central Government and regional government level.

He added that four or five years ago many investors came to Indonesia to make investment in power plants, but only a tiny fraction of them could make it through investment realization.

“Five years ago, 259 kinds of permits were needed for investment. It is impossible for the investors to fulfill the requirement for the permits, the President said, adding that the Government has cut permits from 259 to 58 and will further reduce them to only five.